What Newton has to say about the collapse of WTC

What has to say about the collapse of WTC

This article does not intend to go into details of the reasons that led to the "attacks" of the WTC (), nor who was responsible. My intention is simply to show the evidence together with some basics physics concepts that the three buildings, that’s right, the and Building 7 (WTC 7) were destroyed by the method of controlled demolition, planned before the events of September 11, 2001. This conclusion becomes clear because another explanation would violate the Laws of Physics like the official explanation does.

The official explanation provided by the department in charge to investigate the cause of the WTC collapse, NIST (National Institute of Standards and Technology), is called Inward Bowing Theory. It says that the columns of an arched wall bowed because of the fires’ heat and were unable to withstand the gravitational loads (the weight). These loads were transferred to the adjacent columns by the trusses, which quickly became overloaded and in a rapid sequence, this instability spread to all other walls. Then the section of the building above the impact point (near the 98th floor), acting as a rigid block leaned at least 8 degrees south. The downward motion of this block was more than the damaged structure could withstand, and the global collapse began. From that point on, NIST apparently based on the “pile-driver” hypothesis suggested in a series of articles by Zdenek Bazant with several co-authors. He describes a scenario where the top of the building (part above the point of impact) remains solid as it destroys the bottom. Only when the bottom was completely destroyed in a compact pile of rubble, the top is them destroyed. 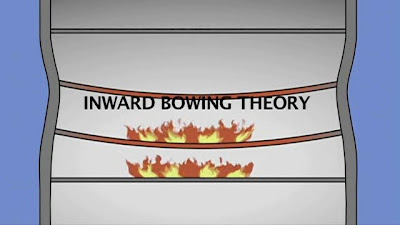 You may find this explanation odd because the most widespread theory of how the towers collapsed is the "pancake theory" created by FEMA (Federal Emergency Management Agency). It postulates a progressive failure of the floor system of the WTC towers ie somehow the floors got loose and were colliding with each other. It had to be discarded by NIST because in the numerous tests it was concluded that even at much higher temperatures than those suggested in the WTC fire the floor system, consisting of a frame of steel trusses, built with concrete, connecting the core columns with the external, not collapsed.

As for the WTC 7, the collapse is attributed to a failure of a single column that was supported by beams in a complex scenario involving thermal expansion of these beams, due to isolates office fires. Then they say that the interior of the building collapsed within its own footprint and was followed by the external walls that had become a hollow shell. Thus, according to NIST, the videos that exist only show the collapse of the external walls.

Well those are the official explanations provided by NIST that was tasked by the Bush administration to investigate the causes of the collapse, in another words, if we think the government is telling the truth we must believe in these explanations.

Now let's point out some observations that can be made ​​in numerous videos of the collapses that make the official explanation, at least, forced and the mainstream media chose not to show (censored?), or show, but did not emphasize the most important points.

The three WTC buildings were the only high rise buildings to collapse due to fire damage before and after September 11, this never happened before or again. A few examples are the building with 38 storeys, in , caught fire on February 23, 1991 that lasted 18 hours, spread over 8 floors but not collapsed. 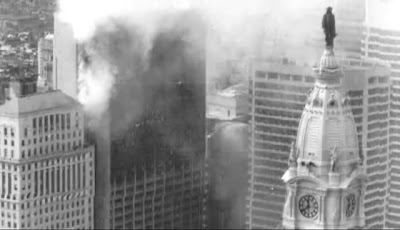 On October 17, building in with 56 floors, built in 1976, caught fire which lasted 17 hours and spread over 26 floors and not collapsed. 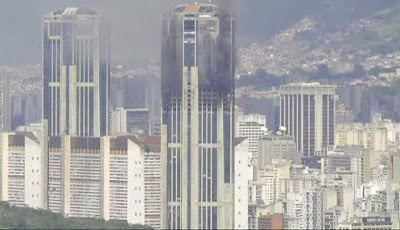 In February 2005 there was a huge fire at the , a skyscraper in that lasted about 20 hours and the building, once again, not collapsed. We see in the picture clearly that the building was engulfed in flames, but at the end the structure remained standing.

W in flames                            and after the fire
A significant information about the fire that most people do not know is that when he has this whitish yellow color like in the picture is because it's burning up too much oxygen. In the case of the WTC the fire was dark red with very dark smoke indicating that there was hardly any more oxygen to burn, and without oxygen the fire is extinguished and does not burn. 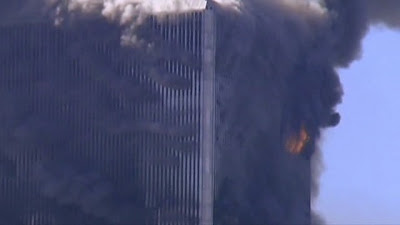 In the wreckage of the WTC were found pools of molten metal and even though it rained between 14 and 21 September, having been used fire retardant and water, firefighters managed to extinguish the fire only on December 13. Do not forget that steel (the metal used in the structure of the WTC) melts only at and burning office furniture can come in the most favorable conditions, even with jet fuel to 760º C. For NIST's theory to work, the steel would have to reach at least 980º C. Below is a picture taken in infrared by NASA which was recorded surface temperatures a few days after September 11. The molten metal found by workers at ground zero were with temperatures twice as high, for being in the basement and the elevator shafts, well below the surface. 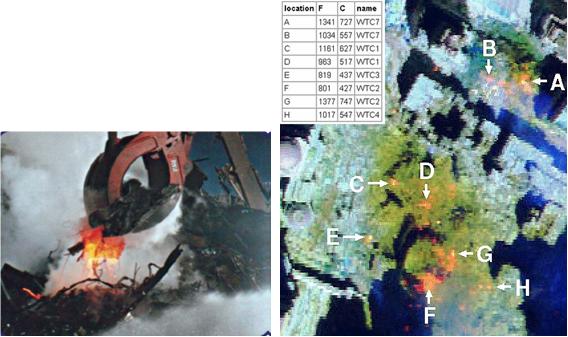 During the collapse of the , metal rods weighing many tons were ejected sideways more than at speeds exceeding (or ). A video that can be viewed on YouTube (http://www.youtube.com/watch? v=eHnLlwqiu0A) shows an analysis by David Chandler, where he explained how it calculated the horizontal velocity of these objects. 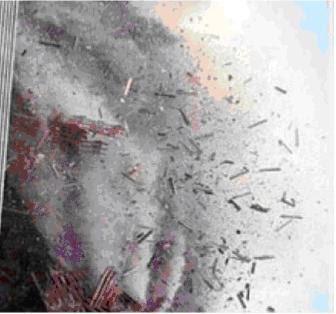 A section of the building weighing more than 300 tons was embedded in the American Express building about (circa of ) away. 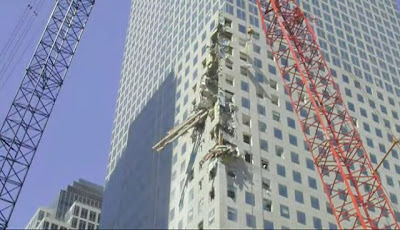 Piece of the WTC embedded in the Amex building

Some "experts" were on television saying that these pieces of the WTC were ejected laterally due to air that was being moving in the core of the building that was essentially hollow and was being compressed as the top came crushing the bottom. But keep in mind that the air being compressed does not have a prefer direction to follow, the standard would be to take the entire floor and then blow all the windows while leaving the building. And as we can see in the picture below there were poofs of air far below the line of destruction. 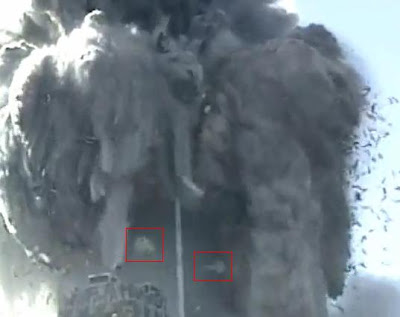 Poofs of air in the WTC

No other building around the towers, other the WTC 7 which was more distant, as can be seen in the schematic of the WTC complex, collapsed due to fire and damage caused by debris from the towers. 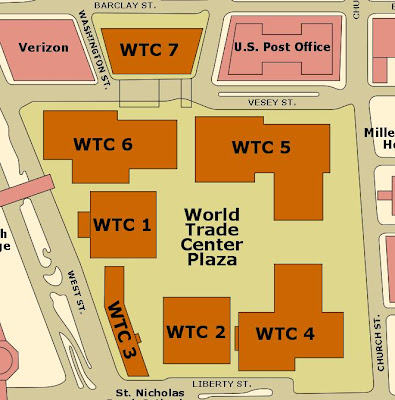 WTC 22-story building directly below the towers was split in half by the debris but did not collapse. 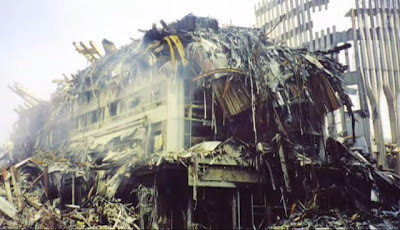 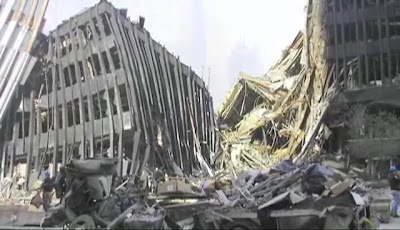 WTC 5 had 9-story, suffered from a severe fire and damage caused by debris but did not collapse. 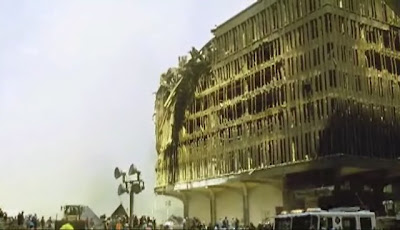 WTC 6, 8 floors, suffered massive damages due to wrecks and fires but did not fall. 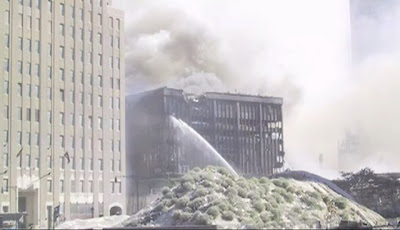 We must also remember that several people, including Brian Clark, manager of the firm Eurobrokers, managed to leave the top of the towers. They were above the impact point, and managed to get to the lobby saving themselves. If the fire was hot enough to weaken steel, at least 900° C, how these people manage to do this? 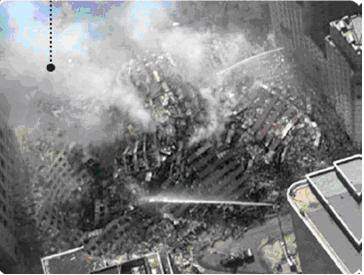 WTC 7 after the collapse 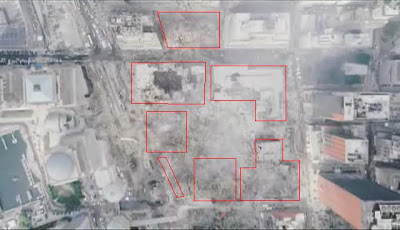 WTC complex after the collapses

Global Warming: CO2 increase is a symptom, not the main cause

Tradução para o inglês do meu artigo  Aquecimento Global: aumento de CO2 é um sintoma, não a causa principal  publicado em 2010 neste blog e na página do GlobalResearch . Global Warming: CO2 increase is a symptom, not the main cause By Francisco Roland Di Biase Disclaimer: (January 2018) The original title of this article ( Climate Change is Not Cause by Man ) has been changed since the central theme is that CO2 is only the symptom of the problem and not the main cause. Of course, because CO2 has a small role in the greenhouse effect (water vapor is the major prompter) once its concentration in the atmosphere increases, a vicious cycle begins. The vast majority of people think global warming is serious, and that scientists have reached a consensus on what is happening. The debates are only about how long we still have. The mainstream media along with many environmentalists led us to believe that unless we take immediate steps we will head for an environmental catac
Leia mais